Every now and then someone comes along who, in their lifetime, puts in place changes which touch not only everyone in their generation, but generations to come. Sir Michael Cullen is one such person.

In 1898, the government of Richard Seddon introduced a means-tested “old age pension”. This pension was available for people 65 and over and was worth around one-third of the average wage. This pension, like most of the later changes, was funded out of current
taxation rather than through a separate investment fund. Subsequently, the age of eligibility declined to 60 and the pension as a percentage of the average wage increased.

However, those who were fortunate enough to be employed by a responsible employer – like my father whose employer was the Auckland Hospital Board – could contribute a portion of their salary to a superannuation fund which paid either a lump sum, or an annuity or the rest of their life based on a percentage of their final salary.

Life in New Zealand was good. But over the course of a generation things were to reverse. Many financial commentators cite the high inflation of the 1970s, the debt taken on to pay for “think big” projects and the decision to remove the tax deduction for private superannuation payments, as the cause of our nation’s reversal in fortune. But it was only the first in a series of extraordinarily poor financial decisions that led to our current predicament.

Over the course of several decades, successive New Zealand governing parties decided that individuals who were able to directly manage investments in property or the shares of listed or unlisted companies should pay no capital gains tax. Meanwhile those individuals who relied on others to manage their money were forced to pay full corporate tax rates of around 33%, irrespective of which personal tax bracket they were in. 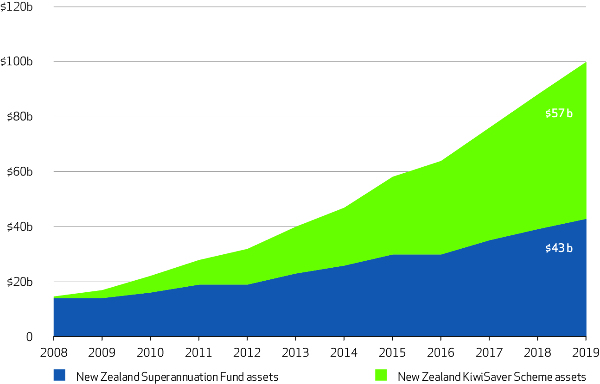 This contributed to the eighties property and share market booms and subsequent busts, and the gradual decline of the superannuation industry. No one was interested in offering professionally managed retirement funds because of the 33% tax rate.

Those with property or share management skills got wealthy, while regular savers got penalised. At the same time the age of eligibility for NZ Super rose to 65 and the payment fell to 33% below a “no frills” lifestyle.

In 1992 – a year after Australia introduced compulsory superannuation contributions for all its citizens – New Zealand formed the Todd Taskforce to question whether compulsory retirement savings should also be adopted by New Zealand. Headed by Auckland accountant Jeff Todd, they concluded that a compulsory superannuation option would be “an over-reaction to averting a future fiscal problem”.¹ It is arguably one of the worst financial decisions New Zealand ever made. As a consequence, the average Australian citizen now has around $145,000² in superannuation savings. New Zealand’s average KiwiSaver balance has just hit $19,500.³

In the 2000s, Michael Cullen (now Sir Michael) changed all of this with three farsighted decisions: the portfolio investment entity (PIE) tax regime, which restored equality of capital gains tax between investing individuals and professionally managed portfolios; the creation of the New Zealand Superannuation Fund – now a world class sovereign fund manager; and KiwiSaver through which New Zealanders have already amassed $57 billion.³ Despite poor historical decisions, one person managed to put New Zealanders back on track.

We all have a role to play in continuing to build on Cullen’s legacy by ensuring that New Zealanders continue to make the best possible financial decisions. The upcoming selection of default KiwiSaver managers will be a significant step on the journey toward becoming a more financially prosperous nation. It is sad to hear that Sir Michael Cullen is unwell. Our thoughts go out to him and his family.

Disclaimer: Michael Lang is Chief Executive of NZ Funds and his comments are of a general nature